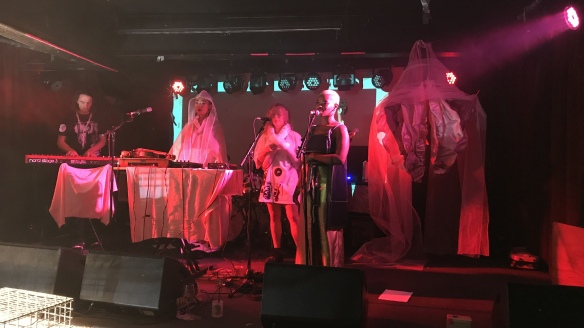 The ceiling and internal walls are painted black. The beams across the roof space are black. The pipes and cables, ducts and vents are all black. It is a coarse black, like a paint mixed with sand, light deadening black. One lateral wall is raw bluestone. Rough and light absorbing, dense cubed blue black cut rock chunks, mortared one on top of the other. But there is a small ray of light on the opposite side. A backlit bar of low yellow light filtering temptingly through glamorous bottles of spirits. They look inviting, sophisticated, sitting there on their top shelf, surrounded by sparkling, glistening, gleamingly clean glasses. It is a combination that speaks to many in the crowd. Pick me up, pour me out. Lift a glass, drink me down. Feel my calming warmth, my warming confidence. Dull your inhibitions, sharpen your connectivity, drink me toward carelessness, toward the fun side, toward letting yourself go.

There’s also a bit of a haze in the air. It’s incense. Maybe this is an atmospheric substitute for the cigarette and dope smoke of the good old days.

There is a lot of noise in here too. If a band isn’t playing, the mixing desk fills the room with sound. The bass is a palpable presence. I can’t find the melody. People are milling and chilling, hanging and slow dancing, like it is all some sort of discordant pagan ritual.

A new band is setting up. A pity for them that the previous band seems to have taken their crowd with them. Or else they have all gone out for a bit of smokey fresh air. I have no idea what is coming next. Just as I had no idea what went before. They were a group of young women playing synth rock in heavily modified bathing suits derived from the glam era. Their costumes were fashionalised using hi vis silvery satin in the form of a quilted one piece on the singer, as opposed to a high rise buttock displaying deep bikini brief, with a collared halter above and thigh high boots below, and including an elegant fascinator on the very top and across the face of the keyboard violinist. The latter appeared a bit like a layer cake of semi revealing fashion statements with plenty of skin in between. Theses two made their male drummer and relatively conservative female guitarist look tame.

They ran a concurrent fashion show en masse on the dance floor. Ten or so young women broadcast their fashion credentials to the audience with great enthusiasm. Designers were celebrated from the stage. It was an interesting combination of performance and presentation.

And now, the crowd is seriously thinning. It seems my $10 at the door is going to buy me quite an intimate next performance. The new band arcs up. Three young men of indifferent attitude. Except that they all have white plastic chains around their necks. The bass player looks a bit like Hagan. I take a second look. However, I hear his name is actually Matt Hayes. So, I conclude Hagan hasn’t been out band moonlighting after all. But it does take me back to more good old days, those of The High Suburban.

Oh, now this is getting interesting, three women have emerged from the taffeta, satin, chintz and chenille vulval gateway at the side of the stage. An Asian ethnic in customised white Buddhist(?) robes, a Caucasian ethnic in an over size t shirt and with a fringed veil across her eyes, an African ethnic in a Nigerian(?) style of shiny evening dress and shoulder strapped top that drops hanging panels of fabric vertically over her thighs. The African girl presents her peroxide crew cut capped face to the audience. She performs a musically accompanied monologue, then leaves the stage.

The music continues as she is followed by a procession of inter ethnic beauties who repeat the pattern of emerging from the vulval fabric gateway to perform individual dance solos on stage right. Their duration is of a few moments each, before stepping down into the crowd to continue some attractively sensual moves as writhing nymphs, each presenting diverse designer fashion statements to the room. The unexpected nature of the collective performance and sound is rather exotic.

The music is a sort of techno electro pop blend I guess. The Asian principal, Japanese I think, pumps a keyboard synthesiser and cuts on the violin. It turns out the veiled white with blonde curls is lead vocalist. She rocks and rolls while sliding and dialling up effects that expand the auditory spectrum. The backing keyboard player drapes his shoulder length dark hair across his face with every forward dip to the rhythm and then flicks it back again. His pale, lightly whiskered face against a black backdrop and above a black t shirt, bobs along in the background like the legendary bouncing ball of the good old days of cinema sing alongs. I can’t see the drummer, he is so low and set back on the stage, but they keep him working hard. Hold it, there he is. His head appears in a gap between the frontline surrounded by projected radiating laser light centred on his scone and pulsing outwards to infinity and beyond. At this point in time it is fair to say he is putting on a dazzling display. There is definitely a lot of energy on the stage.

The show continues as an interesting mix. There is clearly an acknowledgement of a dual discipline camaraderie going on here. I sense it is personal for most of the crowd. There is the enjoyable quality of hopeful up and comers, as yet inexperienced, tending toward the amateur end of the professional scale, but showing how hope can keep you inspired and endeavour can keep you switched on and up for the up and up, if you have the perseverance.

The fashion statements are slowly subsumed by a modestly thickening crowd. I mean it is hardly dense, but I don’t mean it detracts from the atmosphere. On my count, there are around sixty silhouetted gyrating shapes up front of me. I can’t say dancing because the rhythm is largely inconsistent, but there is certainly a lot of sound happening and plenty of episodic rhythmic grabs to hold on too. It is nice to see nearly everyone is on the dance floor instead of hunkered down in even darker corners or blankly tapping their toes in stage remote seats. I think the band and the audience are getting a mutually pleasurable buzz from their collective effort at novelty and vigour. It is great to see so many young women with so many different backgrounds going for it. It is hope that keeps me warm (with thanks to Mel C).

The Elle Shimada Band will be back at The Evelyn in Brunswick St next Wednesday. I do not know if the whole fashion thing happens again, but I hope it does for the next crowd as well.